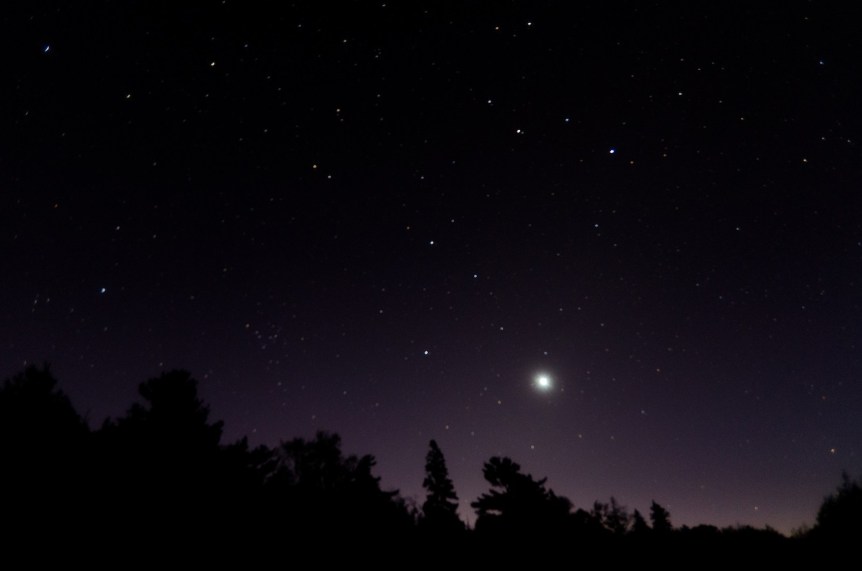 Sometimes I look at the sky and I think, how high can I jump? Like, half a foot or so? What about, how high can I get in an airplane? The delta of up to 84,000 times is the kind of delta that human ingenuity gives us. And it’s not even the limit: how high could I get in a rocket ship?

But even despite that massive increase, the stars that I’m looking at are so much further away. If Earth was a word, the distance to the nearest star is ten times every word you’ll ever say in your life. And yet, we humans went from the half a foot we can jump to the upper stratosphere, where the tallest mountains are vague outlines of purple and white.

It took a lot of work. Not with our muscles, which can only get us about five feet up if we train relentlessly for years, but with our brains. Thousands of ordinary human brains, no smarter or greater than you or I, made the airplanes and the rocket ships. In fact, human brains did a whole lot more than that. They created the entire modern world.

I wake up in the morning to an alarm app that comes installed on my smartphone, which gets its data from a clock that runs on humanity’s collective knowledge of quantum physics and syncs with all the other phones via a network that runs on humanity’s collective knowledge of binary logic. I get dressed in clothes that came directly from somebody I’ve never met who donated them to a Goodwill on the opposite side of a continent from my current residence, and that person got them from a store which got them from a country I’ve never been to. I take a train to work which moves through a huge tunnel under the ocean at upwards of ten times the speed I can run. Humans made all of this! Some of it is pretty suboptimal—the fact that I have to get up at 6am certainly comes to mind—but you can’t deny that it’s incredibly cool.

If thousands of ordinary human minds were able to make all these things, I think that with a few thousand more, we’ll be able to make it all the way to those stars and to the planets that might orbit them.

What might we find there, on those distant worlds? Maybe nothing more than we minimally expect. Some interesting places, both habitable and hostile, to which we can add the beauty that comes with perception by intelligent life. And this isn’t a loss! Improving the diversity and span of human experience across the galaxy is one of the best futures I can imagine for us.

But maybe, just maybe, we might find someone else out there. Not humans in funny suits, like in sci-fi movies, but things which are more different from us than we are from petunias—because we and petunias both evolved on Earth, though our evolutionary branches separated aeons ago. Sentient things made of complex configurations of silicon, crystal, liquid, metal, or things even stranger. Sentient things which are further from humans than anything we know, but that we can still call people, because though they may not have human thoughts, emotions, or biases, they have goals and they don’t want to die and this is all we really need.

Think how similar we are to each other, compared to the others we might find out there. All humans look the same—bipedal ape-like things made of flesh and built from DNA. We think the same—simple animals which evolved higher thought, planning, and consciousness by a constant competition with one another which produced predictable patterns and errors in reasoning. We act the same—pack animals inclined to organize into social groups and gatherings who are practically mandated by our development process to use syntactic combinatorial language along with specific nonverbal gestures and facial expressions to communicate. We feel the same—emotional creatures motivated primarily by fear and secondarily by joy, sadness, anger, and love. We’re as alike as peas from the same pod.

And maybe this is the part of my mind that grew up on Star Trek talking, but it doesn’t make any sense, if we could find and cooperate with these others—and I think we would, judging from how badly we want to not be alone in the universe—that we would still have such silly things as the various -isms and -phobias which are manifestations of inter-human hate and insecurity. How could we hate a fellow language-using, emotion-feeling, hairless ape built by DNA, when we could get along with electrically-charged systems of fractal crystals and gaseous blobs of pulsating color?

If our distant ancestors could gradually build our modern world and our distant descendants could get along with these impossibly different aliens, how could it make sense for me—operating in a flawed modern world but made of the same stuff that made up the humans before me and will make up those after—to hate another human?

These are the things I think of, looking up into the sky at night.